Battle of the Redheads: How Ageism and Patriarchy Have Damaged The Best Actress Oscar 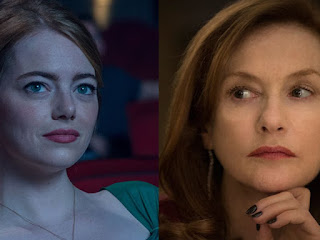 If you have spent enough time with me you will hear my pet theories. Some of them are young, some are decades old. I shared my take on George Lucas’ shifting identification from Luke Skywalker to Darth Vader and how it ruined the Star Wars Saga with my wife on one of our first dates. Another theory revolves around how the true subject of Godfather Part III, should’ve been Michael Corleone masterminding the assassination of President Kennedy.


But the theory I am most prone to share revolves around the predictable voting patterns of the Academy of Motion Picture Arts and Sciences. Once again, the category of Best Actress in a Leading Role was the most safe bet of the 2017 Oscar pool. The Academy, famously made up of largely old white men (though that is changing), always gives acting awards along the same patterns. For men: pretty boys need not apply. Hunky, handsome dreamboats, irrespective of their talent, don’t win Oscars (40 is the magic number, handsome men can win once the crow’s feet and gray hair show up). For women: cute, young women always win. Meryl is the only wild card (she can sometimes overcome this tendency).


I can already hear the MRA types nodding, as if this tendency shows how men are the real victims of sexism. Let me quickly reject this view. Yes, the tendency to vote this way does unfairly hurt handsome male actors under 40 (sorry, Fassbender), but that’s because patriarchy hurts men as well as women. One of the dazzling aspects of Mad Max: Fury Road was how it understood that toxic masculinity damages men in different but no less poisonous ways than the ways it hurts women, quite literally in the case of the tumor-ridden warboys who made a religion out of dying too young.


Last month’s Academy Awards were a perfect example. Natalie Portman had once been viewed as the favorite but Pablo Larrain’s direction of Jackie proved to be too off-puttingly artsy for the Academy. Plus Portman had already been a beneficiary of the Academy’s cute young thing sweepstakes. Ruth Negga was nominated for the little seen Loving, but the paucity of other nominations for Jeff Nichols’ film doomed her nomination. And then there was Meryl, nominated for another little-seen, under-nominated film.


It was clear the Best Actress Oscar was really between two redheaded actresses: American Emma Stone, 28, and from France, Isabelle Huppert, who turns 64 today. This matchup brought a smile to my face because I knew it would once again prove my theory correct. Indeed, Stone was triumphant though Huppert, who had won a Golden Globe in January and an Independent Spirit Award the night before, gave the younger actress a run for her money.


Emma Stone, it should be said, is a fine actress. But Huppert is beyond that. Aside from her body of work which goes back to the 1970s and contains scores of great performances, Huppert is an auteur. That is to say, when you see a film starring Huppert, you know it will reflect her sensibilities as much as the director’s. Paul Verhoeven, the iconoclastic director behind the film for which Huppert was nominated, confessed that Huppert self-directed herself and made her own choices where her character was concerned. Verhoeven is not exactly a shrinking violet as a director but he knew that working with Huppert entailed a true collaboration of equals, not the typical director-actor hierarchy.


By this score alone, Huppert should have won: many other actresses could have played Emma Stone’s part in La La Land without changing the movie significantly, but without Huppert Elle cannot exist. There is no other actress alive that could pull off the character at the heart of Elle or her make choices believable. The depiction of rape won Elle many enemies, but regardless of your feelings about Verhoeven’s take on rape, Huppert’s performance is a triumph.


Huppert may not have won the big prize (this was her first Academy Award nomination ever, which is shocking) but she certainly received plenty of accolades for being the most formidable and fearless film actress on the planet. I can also attest to Huppert’s stage bonafides as I saw her perform Sarah Kane’s Psychosis 4:48 at the Freud Playhouse at UCLA. Huppert stood onstage alone for 100 minutes nearly immobile and was utterly riveting.


This kind of performance speaks volumes about Huppert. She does things that would terrify almost any other actor and does them with inimitable cool. The Oscar clip for Emma Stone offered a striking contrast. When I saw this moment in La La Land, I knew this would be the clip played when her name was called at the Academy Awards. In it her character, at her personal and professional nadir, confesses to her boyfriend that maybe she has been fooling herself like the rest of the doomed hopeful legions who come to Hollywood filled with big dreams. He tells her she is wrong but her huge expressive eyes indicate that she isn’t buying it. I can’t really imagine Huppert playing this scene, even as a young woman. This scene, which earned Stone the Oscar isn’t in Huppert’s vocabulary.


Though diminutive in stature, Huppert is the kind of woman that terrifies Hollywood. Icy, confident, unapologetic, Huppert has no place in the universe created by American filmmakers (a few exceptions: David O. Russell and Hal Hartley worked with her in the last 20 years and she was in the late Michael Cimino’s Heaven’s Gate- she sat next to her co-star from that film, Jeff Bridges, on Oscar night). Terrifying is the last word that comes to mind when thinking about Emma Stone. So even though Huppert’s distinguished career exceeds Stone’s lifetime, and even though hers is a singular and seasoned talent, Huppert lost to the charming ingenue.


But we knew this would happen. Ever since Gwyneth Paltrow won for Shakespeare in Love in 1999, the Academy has rarely missed an opportunity to fête a blushing pretty young (white) woman who has shown some talent. The numbers speak for themselves: since Paltrow, the number of women under 40 who have won the Best Actress trophy is at 71% (14 out of 19). Eight out of that 19 were under 30 when they won the award (that’s 42%). Meanwhile the youngest man to ever win Best Actor, Adrien Brody in 2003, was 29 when he won. He is the only twentysomething to win Best Actor. Ever. Going backwards in time, the next youngest Best Actor winner was Richard Dreyfuss who won at age 30 in 1978. And neither would count as a pretty boy (Brody’s win was a shocker and likely only happened because his competitors Cage, Nicholson, and Day-Lewis split the vote).


Looking over the list of Best Actor and Best Actress winners, it will come as no shock that the women on average are younger than their male counterparts, but this trend has intensified in the last 18 years. And yes, there are exceptions (Helen Mirren, Julianne Moore) but nevertheless the trend is there. As for Best Supporting Actor and Best Supporting Actress, the male actors skew older but the women are more ethnically diverse and not nearly so ingenue heavy. Clearly the Academy has a very different approach to the two actress categories.


So what do we do with this knowledge? For one thing I think this noxious combine of patriarchy and ageism has to be added to the list of grievances that fit under the hashtag movement #OscarsSoWhite. That bit of clicktivism has been incredibly effective and moved the needle, but clearly more needs to be done. And discussing this trend in the awards leads us to the more important discussion: why can’t our 64 year old lionesses get parts as juicy as Huppert gets? Of course the answer is rooted in our culture, our misogyny, and the Death of Adulthood. But change is possible.


Standing outside all of this is Kristen Stewart. Surely she must know that all she’d need to do is star in the next earnest romcom with festival cred and she too would be cradling the Oscar, but she isn’t interested in playing that game, clearly. Like Brando, Stewart was doubtlessly offered a look inside a studio machinery that filled her with such revulsion she ran away and never stopped running.


Like a lot of people I dismissed Stewart as vacant and dull, but she’s acquitted herself in a succession of fine performances, two for no less than French filmmaker Olivier Assayas. Stewart should be commended for seeking out challenging work with auteur filmmakers but I suspect doing work she cares about is reward enough. She’s won a Best Supporting Actress Cesar Award in France (the first American actress to do that) but has thus far received no Oscar nominations. My guess is Stewart will hear her name called someday but if it isn’t right away that’s probably for the better. Winning the top acting honor at a young age can be a burden. We’ll see how Emma Stone manages it. If she’s lucky, she’ll find herself collaborating with directors the way Huppert did with Verhoeven. That power can’t be endowed with an award, it comes from creating a body of work that towers above everyone else’s and saying “yes” to parts that everyone else says “no” to. We can’t know today which young actress will achieve Huppert’s master status 40 years from now, but if the bet is between Stone and Stewart I think I know whom I’d put my money on.